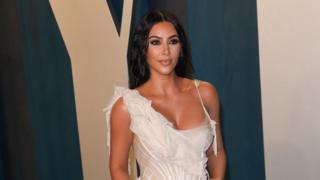 The star said the deal would help her reach a bigger global audience but she would keep creative control.

Ms Kardashian West is one of the world's best-known personalities, with 300 million followers over her personal and brand social media channels.

In January, Coty took a $600m stake in her half-sister Kylie Jenner's brands.

Like Ms Jenner, Ms Kardashian West made her name in the reality TV show Keeping up with Kardashians which became a global hit in the late 2000s.

Kanye West back at Gap with Yeezy fashion line

She has since branched out and launched her first cosmetics range in 2017, which is already worth $1bn according the terms of the Coty deal.

Under the agreement, Coty will take a 20% stake in KKW and take "overall responsibility" for driving up sales of its skin, hair and nail care products.

Ms Kardashian West said: "This relationship will allow me to focus on the creative elements that I'm so passionate about while benefiting from the incredible resources of Coty, and launching my products around the world."

The deal is being seen as a way for one of the world's largest beauty companies to revitalise its brand.

Coty last year launched a turnaround plan amid falling sales in its beauty division and faces an uncertain period due to the impact of coronavirus.

In 2019, it took a 51% controlling stake in Ms Jenner's brands, hoping to leverage her massive appeal on social media.

According to the Financial Times, sources say it has bought the option to acquire a majority stake in Ms Kardashian West's brand at a later date.

"She is a visionary, an entrepreneur, a mother, a philanthropist, and through social media has an unparalleled ability to connect with people around the world."

The latest deal comes a week after Ms Kardashian West's husband - the rapper Kanye West - announced that his fashion brand Yeezy had signed a 10-year deal with the retailer Gap.

News of that tie-up sent shares in Gap up by almost 20%.