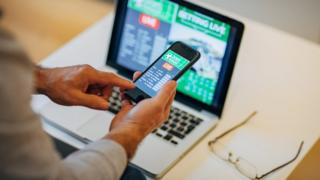 The UK's gambling regulator and the government department that manages it have an "unacceptably weak understanding" of the harms of gambling, according to a report.

It called the Department for Digital, Culture, Media & Sport "complacent".

The commission insisted it had tightened player protection measures.

However, it added: "We accepted before the Committee that there is always more to do and we are carefully considering the findings of their report to see what other additional steps we can take."

Lockdown 'a disaster' for problem gamblers

It said: "The government has approached other public health issues on the basis that prevention is better than cure," said the report by the committee, which scrutinises the value for money of government projects.

"However, the department was unwilling to accept the premise that increasing the commission's budget to prevent harm would be preferable to spending on treating problem gamblers."

It compared the £19m in licence fees the Gambling Commission gathered in the 2019 financial year with the industry's £11.3bn revenues.

The gambling industry itself spends £60m in treating problem gamblers.

The committee says there are about 395,000 problem gamblers who bet compulsively in the UK. A further 1.8 million people are "at risk" of becoming addicted to gambling, it says.

"The effects can be devastating, life-changing for people and whole families, including financial and home loss, relationship breakdowns, criminality and suicide," said the report.

MP Meg Hillier, chair of the committee, said the commission needed to be reformed.

"What has emerged in evidence is a picture of a torpid, toothless regulator that doesn't seem terribly interested in either the harms it exists to reduce or the means it might use to achieve that," she said.

"The commission needs a radical overhaul: it must be quicker at responding to problems, update company licence conditions to protect vulnerable consumers and beef up those consumers' rights to redress when it fails."

A DCMS spokesperson said: "We are absolutely committed to protecting people from the risks of gambling related harm and recognise there is more to do.

"We have been clear that we will review the Gambling Act to ensure it is fit for the digital age."

Industry group the Betting and Gaming Council said its members had introduced voluntary measures to help spot and help gamblers suffering from addiction.

It said these included advertising restrictions, cooling off periods on gaming machines, monitoring play and spending, and restricting and closing hundreds of thousands of accounts with new ID and age verification checks.